Interior Design Style: Modern Style And What It Can Do For Your Home 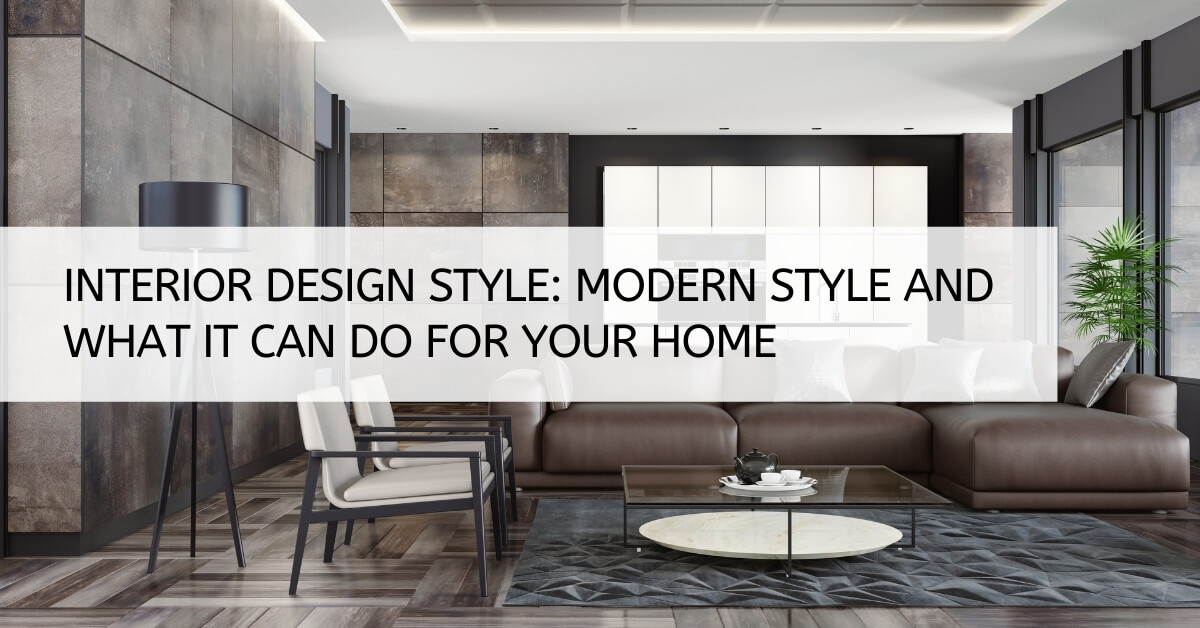 Are you wondering if the modern style of interior design is for you? Or maybe you just want to get an idea of the distinguishing features that make modern interior design special? In that case, read on! This page is going to cover all the key features of this style, and touch on the overall effect it can have on a home.

Modern interior design typically has a rather no-nonsense look, and the lines in any given room will be neat and crisp. The room in the picture is a great example of this, because you can see that the furniture, windows, and lights all make lines that clean and straight. And when the lines meet, they meet in sharp angles like those on the glass screen. This is often an element of mid-century modern interior design.

There is only one line that’s different from the others, and that’s the curve that the sofa’s chaise makes. This is actually reminiscent of contemporary interior design, where curves are a defining feature in their aesthetic. By keeping most lines straight and sharp while adding in few curves, this room brings a light contemporary touch to the traditional mid-century modern designs, creating an urban modern interior design aesthetic.

Modern interior design also has a tendency to feature furniture pieces that are very minimalistic in design. As you can see in the picture, the tables are purely functional, with little to no decorative quality. Because of this, modern-themed furniture are often more lightweight than others, and can be moved about more easily.

For modern interior design to have that sleek, clean look we love, it’s important not to let clutter disrupt the aesthetic. Instead, let your empty spaces draw attention to themselves. Use accents sparingly, and instead let the bareness show its own beauty in your home.

There are plenty of ways to add your own personality into modern interior design. For example, choosing between industrial-style bulbs and a bubble pendant light can have a pretty big impact on the atmosphere of a room. Similarly, whether or not you choose to add the curves of the contemporary style, and the materials you use for your floors, tables, chairs, and so on, is completely up to you!

Overall, modern interior design has a strict set of rules to help you achieve that pristine look, but within these rules, you are free to explore and express yourself as you see fit.

Modern Interior Design: The Good and Bad It Can Do For a Home

Many elements of modern interior design are adjustable. You could opt for artificial lighting if you’re not a fan of natural light, you could follow the sharp lines of mid-century modern design, or you could soften a room’s look with a couple of contemporary-style curves. However, the aesthetic of modern interior design is one of the least tolerant to clutter, especially because much of the aesthetic focuses on the neatness of clear lines. So, if you have various collections that you would love to display, or if you have trouble keeping a neat room, you might want to think twice before committing to the modern aesthetic.

One perk of modern interior design, though, is that smaller pieces of furniture are often lightweight, and furniture arrangement can be fairly flexible within a room. So if you’re someone who likes to use a room for multiple functions, and so need to frequently rearrange your furniture, modern interior design can be a great way to make your life easier while making sure your room always looks amazing!

Check out our other articles here!