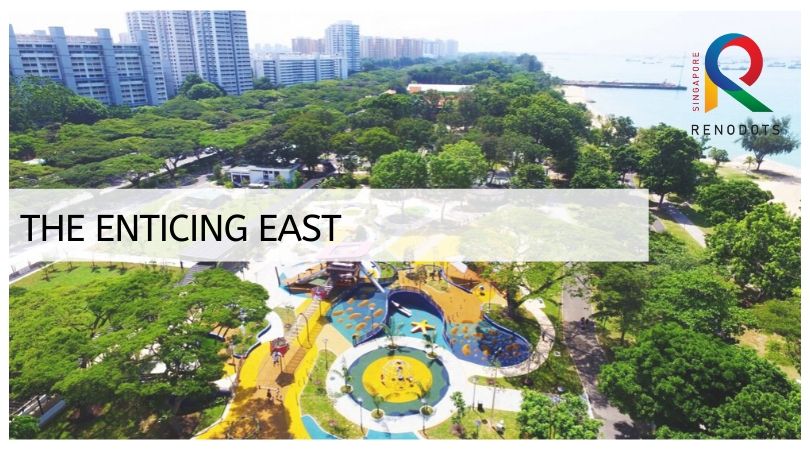 Singapore’s east coast is well known to be a haven for foodies, boasting famous supper places like Simpang Bedok and Lagoon Food center. But with major ongoing developments, the east of Singapore has transformed into a busy metropolis in Singapore, with greater accessibility and an increasing exclusivity, you are always bound to find new things to do!

Credits  East Coast Park has been around for as long as anyone can remember. The seaside park connects all the way from Gardens by the Bay in the CBD up to Changi Beach Park. This 10km stretch of beach features cycling and running paths along the beach, giving you an unrivalled view of the sea as you relax by the shore. It’s the perfect weekend getaway from the busy city life. You can even pitch a tent and stay over if you want to reconnect with nature. If you miss the older attractions that were once in East Coast, like the Big Splash, Lilliputt or the only Macdonalds which had a skate-thru, fret not because East Coast Park is being revamped. Currently, there are two brand new areas which have already been opened. Marine Cove boasts one of the biggest McDonalds restaurants in Singapore, with a one-of-a-kind salad bar and burgers you can’t get anywhere else. Marine Cove also have an extensive playground for your child (or your inner child) to go and explore.

Credits Parkland Green has also opened up along east coast park. The development is filled with dining and drinking options, with bistros and bars along side family restaurants. Making it perfect for any occasion and any group. There are so many different options to chose from you’ll never get bored dining here. One of the bars even has its own private pool for guests to use as they enjoy an unobstructed view of the beach. Parkland Green also offers many activities over the weekends, such as drawing classes for children, or taichi lessons in the mornings, making it great for people of all ages.

Credits Not just that, East Coast Park is also opening up 2 new areas by 2019 which will take over the old compound of The Big Splash and Goldkist Resorts. These developments are slated to feature even more wine and dine options, as well as a new water play area.

The east is getting even more convenient too. With the Thompson-East Coast line, there will be more stations in areas like Marine parade, Tanjong Katong and Siglap which connects you to Orchard and the CBD. This makes getting to and from the east even easier, with a direct line to the city and the existing East-West line connecting you across the island, there is no where you can’t get to quickly. The Thompson-East Coast line opens up in 2019 and is slated to be complete by 2024, making it perfect for those who are looking at upcoming BTO projects in the east too.

With all the news about Project Jewel, news about Terminal 3’s Extension has been completely eclipsed. By the end of the year, a new section of Terminal 3 is set to open, with increased spaces for families. The area is set to include an amphitheatre and a ultra high-definition screen in the public gallery area. This makes it perfect for families who want to have a meal and hang out or hang around to soak in the atmosphere while watching a football match.

Credits The area is also set to have more dining options and retail shops, giving you even more choices!

It is impossible to talk about the redevelopment of the east without talking about project Jewel. The multi-billion dollar project has gone on for years and with new tenants coming in, its set to be one of the most exciting parts of Changi Airport.

Credits Planned to contain the worlds largest indoor waterfall, Project Jewel is going to be one of the most glamourous shopping centres in the world. The shopping centre will link terminals 1, 2 and 3, as well as the Changi Airport MRT station, making it extremely accessible, whether you are going there for a meal, or planning to stop by before a flight. The project already has huge tenants on its list, including a Pokemon Center which will carry region exclusive merchandise to Singapore. There will also be a cineplex run by Golden Village, showing the latest movies and blockbuster hits from all around the world. Most excitingly, it has been confirmed that two huge international food chains will be located there. A&W, an old time classic which sadly disappeared from Singapore after too much competition in the fast-food sector, is finally returning to our shores. You no longer need to travel up to Malaysia to get your fix of a Coney Dog or a classic Root beer float.

Credits Shake Shack is another world famous tenant coming to Project Jewel. The New York-based Burger Joint has been reviewed and loved by chefs and food critiques all around the world. You can expect hours of long queues when it first opens, but unless you plan to fly to Japan to try their famous burger, this is probably your best option.